Crufts is the oldest and biggest Hound-show on the planet. It started out as a Terrier-show in  but became an All-breed show in 1891. 1892 saw the first entries of Irish Wolfhounds, and Irish Wolfhounds have participated ever since. This year, around 21,000 hounds from more than 200 breeds and 45 countries for one of the most prestigious awards in the dog world, Crufts Best In Show.  Among them were 139 Irish Wolfhounds, judged by Roger Tebbutt on Saturday 9th.

END_OF_DOCUMENT_TOKEN_TO_BE_REPLACED

IWDB gives us access to full pedigrees of most Irish Wolfhounds dating back to the breed founders. For Wolfhounds born today, that equals complete data for at least 40 generations with some lines stretching more than 60 generations back in time, mostly dependent on how young ancestors were when bred.
END_OF_DOCUMENT_TOKEN_TO_BE_REPLACED

Where transparency and collaboration is pivotal

END_OF_DOCUMENT_TOKEN_TO_BE_REPLACED

There’s been some discussions recently as to why iwdb shows different (lower) values of inbreeding than some other systems. We would like to take the opportunity to explain how we calculate Coefficients of Inbreeding (COI), how that differs from Wright’s formula for doing the same thing, and why we’ve chosen the method we have.

This is what IWDB does. When Sewell Wright constructed his formula in 1922, he also added that the COI of the common ancestor itself should be added to the calculation. This is the way it’s done in most pedigree-programs, but not in IWDB. Thus IWDB will report a somewhat smaller

There are technical reasons for our choice to omit additions of common ancestor COI. IWDB calculates COI on anything from 3 through 10 generations. In order to include ancestors COI, we would have to store the COI of all dogs that were bred from in the database in 3-10 generations. In order to provide accurate and fast calculations for trial matings, we would have to include all dogs in the database in this dataset as well as COI of all trial matings. The COI would have to be recalculated for all descendants any time we add an ancestor to the dataset. All of this is very time consuming. Typically, in the neigbourhood of 30 minutes each time it’s done.

What difference does it make? It varies a lot and all depends on the ancestors, their inbreeding and their usage. IWDB will normally report a bit lower COI (Anywhere between 1-3 percentage points) than other programs.

We are comparing apples to apples, though, so when comparing to breed averages, the calculations done are the same.

We have added Contribution of Blood as a value in the ancestor-listings of IWDB. Interpreting these data is something some people are very used to, while it’s unknown territory for others.

Contribution of blood is an estimation of the genetic contribution made to an individual by a specific ancestor. It is given as a percentage. The base theory is that each of the parents contribute half of the genetic makeup for the offspring (50%). Each grandparent contribute a quarter (25%) each, and so on.

The contribution of blood should not be interpreted as giving a precisely accurate measure of the genetic contribution in a hound. In these calculations, the whole of generation 10 seems to be as influential as the parents. That’s not how these things work.

How can I use this?

These values are useful to see which dog is more influential in a certain breeding-program. This is especially true if the breeder is linebreeding. Then one of the more interesting questions is “who are you linebreeding on?”. The contribution of blood will give a good answer to this question. Look for the hounds with high percentage in common ancestors.

There’s been a lot of discussion in the worldwide Irish Wolfhound community on the popular sire syndrome, especially related to Quincy of Kilmara, his parents and siblings.

The popular sire syndrome is usually used to describe the situation where one stud dog and his offspring has become so popular that it’s very hard or impossible to avoid him in any given pedigree or mating. Most or all dogs alive will be related to him in some way. This constitutes a genetic bottleneck, where this dog’s genes are spread throughout the whole worldwide population.

There’s been a number of popular sires in Irish Wolfhound history, where some reasonably popular dogs born in the 70s now being in most pedigrees. The most well-known example of these is Eaglescrag Lysander, born in 1975. Almost all dogs born from 1999 and onwards are related to him. The last litter born without him in the pedigree was born in Canada in 2012. Other well known and historic examples are Clonboy of Ouborough and Sanctuary Rory of Kihone who both have a very special place in our breed history as important dogs around World War II. They are both present in the pedigree of every Irish Wolfhound born in the last 50 years or so.

How do they occur?

The popular sire syndrome occurs when there’s either very few individuals to breed from, or one dog produces excellent progeny who are then used a lot. Not all dogs who produce a lot of litters will become a popular sire and some dogs do eventually become very popular through the quality of their progeny even though they didn’t breed that much.

A good example of this is our 100+ founders, who are all present in all modern Irish Wolfhound pedigrees. It’s thus impossible to breed an Irish Wolfhound without the blood from great danes, borzois, the numerous deerhounds, the one mastiff or one tibetan dog used in resurrecting the breed more than a century ago. They’ve all gone on to become involved in every Irish Wolfhound pedigree. This has occured naturally, mainly through the breed bottlenecks around World War I.

In IWDB.ORG, there’s a special tool (Under the offspring-pane) to look at the influence every dog has had historically. These graphs really show how a popular sire syndrome evolves over time. There seems to be a point-of-no-return where a dog who passes that point eventually will become a popular sire given enough time and generations. One might argue that this really won’t be a problem unless each dog is reasonably closely related to the dog in question. With Sanctuary Rory of Kihone it took only four generations before he was present in the pedigree of more than 90% of dogs being born. Thus he had a major influence because of the short timespan used to become dominant. With Eaglescrag Lysander it took six generations to reach that point. The same goes for Quincy of Kilmara who passed 90% in 2016. Others are slower in gaining influence, like Wild Eagle Saxon-StClair, born in 1980 and now approaching 90% population coverage, nine generations later.

Some would argue that the popular sire syndrome really doesn’t matter unless the sire in question is present in all 5 or 6 generation pedigrees. The tibetan hound Wolf had his first litter in 1892, some 31 generations ago. Looking at the pure mathematics of this, these 31 generations would include some 4 billion individuals. It’s extremely unlikely that any dog born at that time who had descendants over a few generations wouldn’t be present in all pedigrees today. Even if Wolf is present 4 million times in your 31 generation pedigree, he would still only have contributed 1/10 of a percent of the gene material in your dog. His influence is thus reduced through the many generations passed and the influence of other dogs.

Does it all matter?

Is the popular sire syndrome really important? Yes, it is. As a breed we need to make sure there’s a huge variation in the dogs being used in breeding. If we all use the same sires or allow them to be overused, we will lose genetic variation, be more vulnerable to genetic diseases and generally have a less diverse breed than we do today. It’s the responsibility of every breeder to take care of our breed and make sure we don’t get stuck in genetic bottlenecks. It’s also the responsibility of every owner of males to make sure they don’t become matadors. A matador is a very popular stud dog, generally used to sire more than 5% of the population in any given region. Creating matadors will increase the likelihood of him becoming dominant in pedigrees over a short period of time. Special care should be taken when semen is exported or stud-dogs are being used abroad as these may quickly be influential around the world.

Given the new tool in iwdb, breeders may see how any dog in a trial mating has influenced the breed and take appropriate action as they see fit.

The database has pedigrees of around 160,000 Irish Wolfhounds. There’s lifespan-information on more than 6,000 of them. That number is rapidly increasing. This information allows new knowledge to be gained about diseases and longevity in Irish Wolfhounds. In addition, it helps breeders make informed choices when selecting breeding stock. We need your help in getting info about your deceased dog in the database. Lifespan info is shown on the pedigrees and there’s also a listing of average lifespan for each dog’s pedigree under the ancestors-pane.

How can I help?

By submitting lifespan-information to iwdb.org, information will be archived and published. The information will also be used to calculate longevity-info in the breed and in pedigrees. In order to get a complete picture, we need information on all dogs, not just those that have been bred from.

There are several ways you may submit info:

The IWDB Work Group are very open to give academical researchers access to our dataset. We need further research into a number of issues related to Irish Wolfhounds. Good pedigree data is often key to making such research possible.

END_OF_DOCUMENT_TOKEN_TO_BE_REPLACED

Paying attention to inbreeding levels is important for breeders, breed bodies and buyers.

Kennel Clubs worldwide recommend low inbreeding levels. They want to combat genetic diseases and inbreeding depression in breeds. Recommendations vary a bit. We find the recommendations of The Kennel Club to be quite sensible with some adjustments.
[…]where possible, breeders should produce puppies with an inbreeding coefficient which is at, or below, the annual breed average and ideally as low as possible.
The point being made is that we need to breed below current levels in order to not increase inbreeding in general. We believe a one year perspective might be a little low as it’s vulnerable to fluctuations based on just a few litters, and have chosen to work on the last ten years instead. We also find the idea of just working with national averages a bit outdated, and have chosen to use the whole world for our baseline data.

We struggled a bit on how we could show inbreeding understandably. Could we use a diagram? Maybe a combination of line and bar graphs? Maybe use a table? 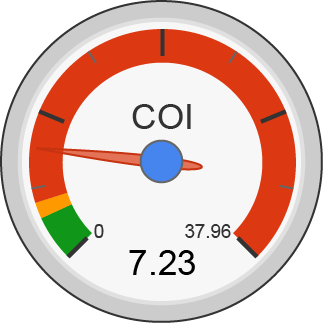 We’ve previously created a handy table on inbreeding in the Irish wolfhound population.

The Irish wolfhound database is by no means complete. Although our goal is to record the pedigree of every Irish wolfhound ever, we are not able to reach that goal. The main reason is that we don’t have access to all Kennel Club registers, and not all Kennel Club registers are complete. If you are familiar with the wolfhound population in one of the countries where our coverage is less than complete, we would be very grateful if you would help us by sharing your data.

Here’s the status on countries where we have registered irish wolfhounds as of december 2017: